Farming can be all of these, and so much more.  The 2022 growing season threw a whole bunch at us – from an early frost to extreme heat to a late summer rainstorm.  Through the challenges, our vineyard team, our grower partners and our winemaking team rolled up their sleeves to get the job done.  When the last vine was harvested, the crop came in great, with nice rich complexity and ripe concentration.

We appreciate all the long hours that go into the harvest season, as well as making our wine year-round.  We couldn’t do it without our hard-working employees.  We will definitely be raising a glass to them this holiday season! 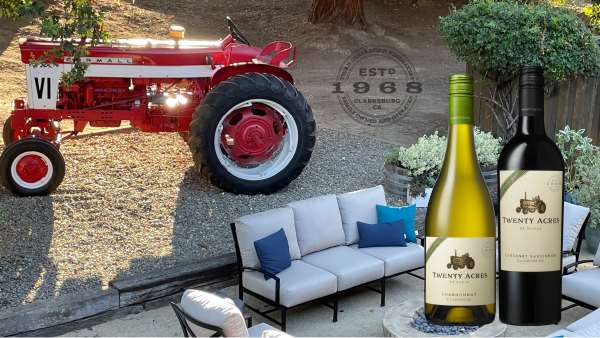 A NOD TO HISTORY

In the late 1800’s when our family first started farming in the Delta, it was literally “horsepower” as mules and horses drug the plows, pulled wagons and provided transport for the crops we grew.  By the time we were planting grapes in Clarksburg in 1968, it was an old International tractor doing much of the heavy lifting.  As our first mechanical farm equipment, three generations of Bogle’s spent time behind that wheel.  In fact, it was a 1979 picture of Chris Bogle teaching his son Warren to drive the tractor that inspired the label of our Twenty Acres by Bogles wines.

Though that original tractor is long gone, in a nod to our history, we sought out a vintage International, which now lives at our Home Ranch in Clarksburg.  The 1958 Farmall has been restored and is in (somewhat) working order.  With founder Warren Bogle’s 1919 Ford Model T truck greeting visitors at the entrance and the Farmall stationed over our Levee Terrace along Elk Slough, these antiques offer a glimpse into our farming past here at Bogle, six generations in the making. 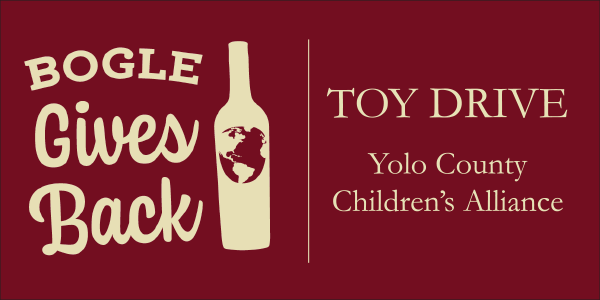 Bogle Gives Back is proud to be partnering with the Yolo County Children’s Alliance again this season in an effort to provide a Merry Christmas for children and youth in our region.  For the last several years, Bogle team members have eagerly donated new, unwrapped toys for this program, which last year provided over 1,000 gifts to children in Yolo County.  This year, we are asking our guests to join us in giving!

For each new, unwrapped toy brought into our Wine Shop from November 1- December 11th, we are offering a gift card good for a Tasting Experience for Two, which is redeemable through March 31st.

Once the gifts are collected by the Yolo County Children’s Alliance, they’ll be hosting their annual holiday toy distribution event for families on December 17th.

“This goal of this event is to provide our community with a holiday celebration complete with free food, music, and of course toys,” says Katie Durham, Resource & Development Manager for the YCCA.

“We encourage parents and caregivers to bring the kiddos to the event, since the YCCA team pre-wraps the toys to keep them a surprise! With every dollar donated, or new toy collected, team YCCA is able to put that right back into the community along with other resources for families.”

Anyone who would like to contribute but can’t get to the winery can donate directly at www.Yolokids.org/donate and click on “Holiday Toys”.

Help us make a child’s holiday even more special with a donation…help Bogle Give Back. 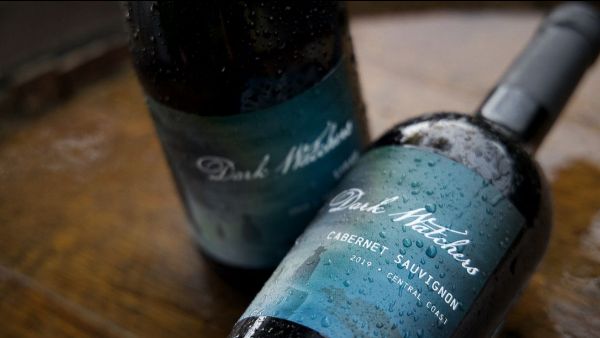 The legend of Phantom harkens back to our roots in Glasgow, Scotland, where it is said a Bogle, a boogeyman, once stalked the hillsides, affecting those less than pure of heart.

Here in California, there are hillsides that hide their own legends, those of Los Vigilantes Oscuros.

Early Spanish settlers to California made their way up the coast, searching for land and putting down roots in the early days of organized agriculture.  But these settlers were not alone.  Legends swirled of shadowy figures high above on the cliffs and hillsides, watching those below.  These figures were silent and ominous.  In English, they were called The Dark Watchers.

Generations have spoken of the figures, who watch but don’t speak or act.  In fact, John Steinbeck in his 1938 collection of short stories The Long Valley, wrote of these apparitions.

“His eyes sought the tops of the ridges ahead. Once, on a white barren spur, he saw a black figure for a moment; but he looked quickly away, for it was one of the dark watchers. No one knew who the watchers were, nor where they lived, but it was better to ignore them and never to show interest in them. They did not bother one who stayed on the trail and minded his own business.”

Today, Bogle works with grower partners around the state, some of whom are located in the Central Coast region of Arroyo Seco, where stories of Los Vigilantes Oscuros are prolific.  It seemed natural to complement our Phantom wines with The Dark Watchers.  With the creation and release of a barrel- aged Cabernet Sauvignon and Syrah, we welcome another ghost story into our midst.

Our Frontier Wine Club members have already gotten a glimpse of these wines in a club selection this fall.  With just a few hundred cases of each produced, these are very limited wines. For more information or to purchase, click here or make a trip to our Home Ranch Wine Shop before they disappear. 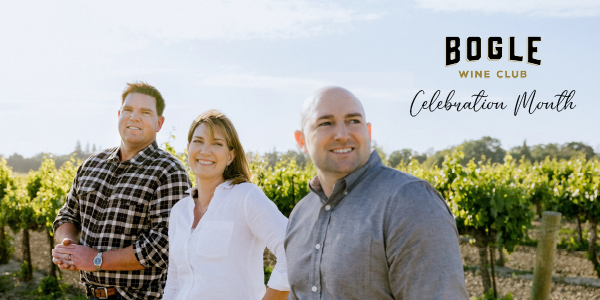 Here at Bogle, we are so grateful for our wine club family!  While we would love to get everyone together for a holiday celebration, the fact that we number over 4500 members now makes that more than difficult!

Since we are unable to celebrate here at the Home Ranch, we thought we’d bring the celebration TO YOU!

Keep an eye on your in-box soon for an email from your Wine Club Crew.  We are excited to be bringing you complimentary tasting opportunities, special discounts from our favorite vendors, online and shipping offers, and much, much more!

We can’t wait to celebrate the season with you!